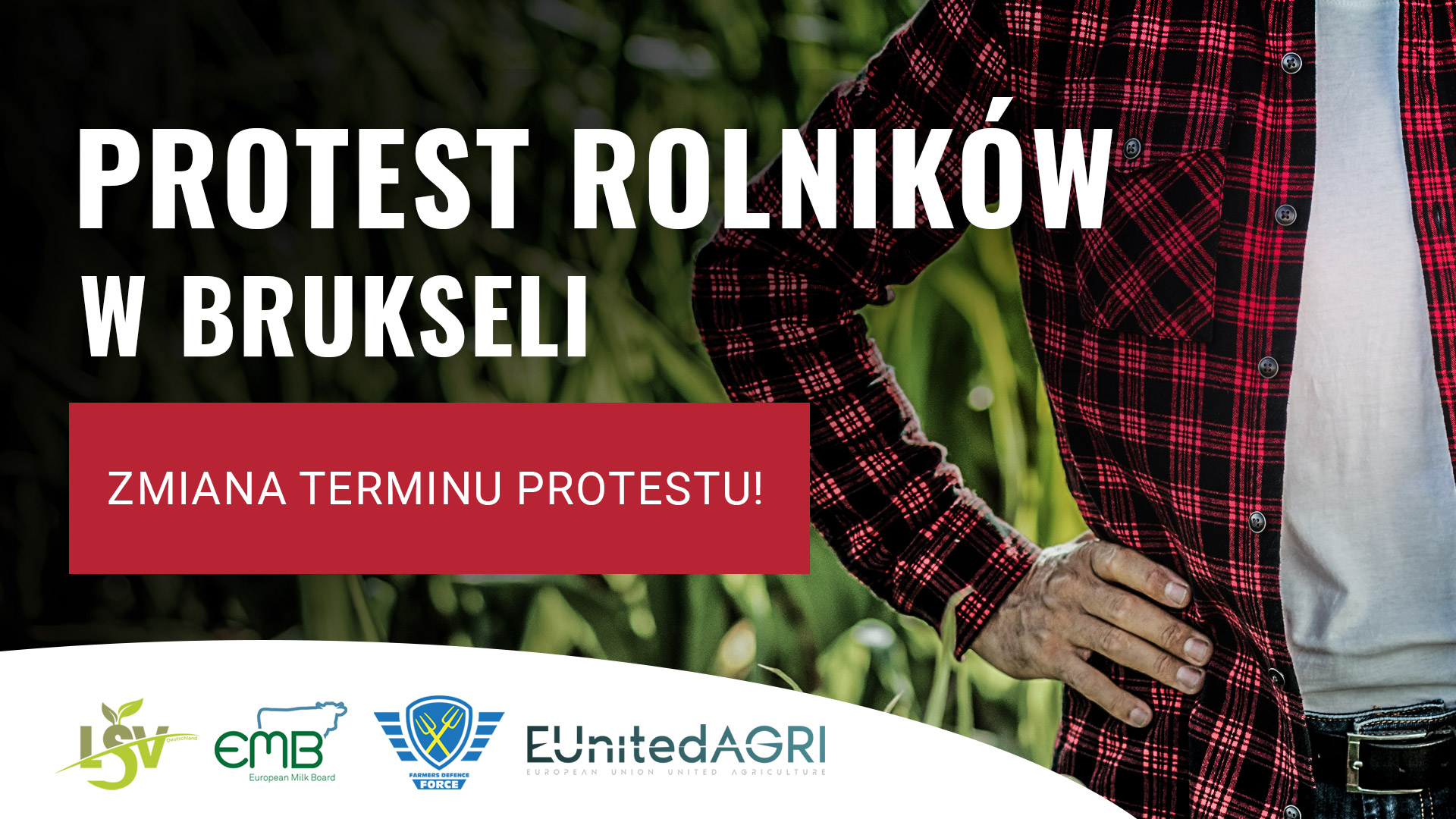 The farmers’ protest in Brussels, announced for 13 and 14 December 2021, has been postponed

Thousands of EU farmers will take to the streets, demanding a fair food and climate policy and the safe food sovereignty of the EU.

On December 6, 2021, the #EUnitedAgri Management Board decided to change the date of organizing the protest.

Unlike some European politicians who want to satisfy their own ambitions and ideological aspirations, our actions are characterized primarily by responsibility. On a daily basis, we are responsible for food security and the maintenance of the production chain in a complex agricultural system – a system that officials and commissioners do not understand. That is why at yesterday’s late night meeting of the #EUnitedAgri Board, i.e. the platform of united European agriculture, which includes organizations and unions from 13 European Union countries, decided to postpone the protest of farmers in Brussels, announced on December 13 and 14 .

The most important goal – which is to create the #EUnitedAgri Platform, i.e. an alliance of farmers from different countries who are brave, desperate and determined to fight for the future of European agriculture and for the safety of the European consumer – has been achieved.

We plan to use the time we have gained to build even greater support, build structures, collect human capital and expand cooperation with new countries, so that the #EUnitedAgri platform will become a significant force in the European Union as a representation of farmers.

Let us remind you that farmers representing 13 European Union countries have already joined the #EUnitedAgri platform. From now on, we intend to speak with a common, and therefore definitely more resonant, voice.

As president of the Institute of Agricultural Economy, an organization that came out with the initiative to unite European agriculture in the face of the threat of harmful projects such as; ban on cage farming, Fit For 55 and other restrictions on agricultural production, I assure you that they will meet with a decisive response from EU farmers gathered around our initiative organized around Poland.

Strong suggestions from the Brussels police, new messages on the development of the pandemic, as well as announcements of planned lockdowns in other countries, including Belgium, force us to change the direction of planned activities. Although responsibility requires us to fight for the interests of consumers and producers, we are also aware of the attempts made to make it difficult to carry out our demonstration.

– says Szczepan Wójcik, President of the Institute of Agricultural Economy

As a new platform on the European market, we will always stand on the side of European – including Polish – farmers, and all attempts to hit agriculture will meet with a decisive response from our platform.

We believe that the anti-breeding groups that operate in Brussels today have too much influence on the commissioners and the EU bureaucrats. Decisions made under their influence have a destructive impact on agriculture and the economic development of individual European Union countries. In response to harmful projects, farmers came together. The first event was to be the organization of a protest in Brussels, but for the sake of the success of this important project, we put the health of the participants first.

Our protest is to be the voice of the farmers, and the last thing we want is his uncontrolled transition into a regular battle with the Brussels police. The manifestation will take place at the beginning of next year, we will not be able to keep the embittered people any longer. Today, the European Union is deprived of one of the most important attributes which determine the security of free nations – food production. We will not allow the utopian visions of the commissioners to shake the pillar of security for which we are responsible!
– says Szczepan Wójcik, President of the Institute of Agricultural Economy

We are still organizing!

THE GREEN DEAL IN THE MEDIA